Rerunning in the Rain 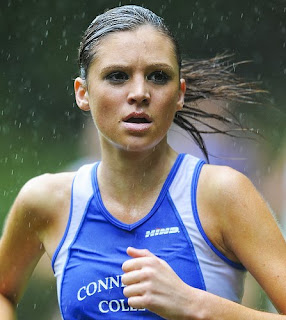 If I was hot and female, I would have looked somewhat like this while running in the rain. Unfortunately for you I'm an overweight and balding old guy. :D

Friday I ran the 5 1/4 mile Interurban Trail course, the weather was as wet as I had ever seen while running. The wind was out of the south at 5 to 15 miles per hour with occasional gusts higher. The rain was coming down like a sideways soaker hose. With the wind from the South my back received a good dousing on the way out. The temps were in the mid to upper fifties so it was still comfortable if you keep moving.
At around the 2 mile mark the rain let up briefly and a rainbow appeared - one of thos "double rainbows" with two separate arcs. the first arc glowed brilliantly - it scintillated. The second arc was more subdued, but still quite visible. As the rain resumed I was concerned that my electronics might be damaged - as I jog, I am a veritable nexus of electronic regalia - Blackberry, Garmin, and Zune. well no worries, my back is to the rain. At about the 2.5 mile point I realized that that would not be the case for the last half of the run (dur!)
I turned at the 2.6 mile point at Willis Street in Kent and was met by a wash of rain to the face - not the large pelting drops that hit with a "thwock" but a full and gentle wall of droplets that soaked you, but did so in a most civil manner. I began to theorize on the amount of current that the headphone were carrying and considering the shock hazard , but the two electrodes would need to arc across a large vacuum so I deemed myself safe. my electronics for the most part was covered by my shirt and in either a holster (Blackberry) or pocket (Zune) but my Garmin bore the brunt of natures wrath sitting, like a mighty bulwark upon my wrist.
The wind from the south which for the first half had been pushing me along ever so gently, had become a fierce adversary pushing back at my progress. It also served to keep me cooled down and I completed the rest of the run with good pace.

The weekend was spent chilling at home and church (Saturday is my sabbath as Sunday is a very busy day!)

Monday I repeated the run, but had procurred new running shorts - no room for Zune! The weather was cloudy and the rain was minor and spotty. Now I am settling in to the whole "5 miles is normal" routine and feeling quite happy with myself. my pace is adequate at 5.5 mph. I'm sore after the run it's a "good" sore, and no injuries yet (knock on wood!)

I found out that my wife is going to need some help Wednesday unloading hay, so I move my next run up to Tuesday - I've been trying to get my church friends to join me on a run and the Aviator agrees and makes it out. Although the pace is slower, I like having a partner to run with - conversation while running is difficult, but it helps build endurance. No rain Tuesday at all during the run, it's a bit brisk though. Today (Wednesday am) I'm feeling a cold coming on so I'm going to take it easy for a couple of days and let this run through. I'll have World of Warcraft and a new level 80 to keep me busy while I get well!
Posted by Sam at 5:36 AM No comments:

Running in the rain

If you want to blog at least blog about goals. 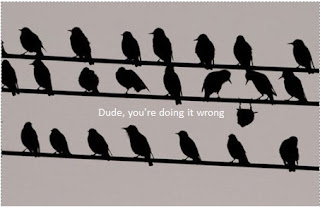 The past few weeks I've been dealing with foot pain - particularly on the outstep of my left foot. After doing my first 5 mile run, my foot ached enough to cause limping. I went to the running shoe store owner, he got me on the treadmill and said YOU ARE DOING IT WRONG! and told me to change up my running style completely I tried what he said, but it was uncomfortable and my heart rate was near max the whole time. Then as luck would have it my wife was thrown from her horse ( I'm a funny guy!) I took her to the doctor and while we were discussing the wifes broken thumb in the Xray I asked him about my predicament. He said in essence "YOU ARE DOING IT WRONG!" and told me that the way I run is ok - for now. I should expect some pain as my foot gets used to being in the proper geometry in these most expensive shoes,. I originally bought the shoes to help with Achilles tendon pain and the releif was instant. The Doc said "Sam, you have to expect that those portions of your foot that are being used for the first time may be a bit tender, but they will get in shape in time.

So Monday I did a 3 mile run and felt awesome - my zune was dead so I had to entertain myself - I whistled the tune "Take me to the River" (8 weeks at number 1 on the MP3.com Christian rock charts back in the mid 90s) now my pulse was in the 150-160 range, but the run was very do-able.

Today I made it almost 5 1/4 miles non-stop. I ran the way I normally do, maybe a bit better posture but not any big change. My zune was fully charged and I chose to run with Diana Krall (The Girl in the Other Room and Live in Paris)
This is the farthest I have ever ran in my life, and although it's a monumental occasion I could have kept going! I'm hoping to do my first race in December - a 10k and although I have no illusions about finishing in the top 10 (or 20, 30 etc) I am very confident that I will finish it, and that will be a win for me.
Posted by Sam at 5:36 PM No comments: