Autumn is Setting In

Leaves are falling all around, Its time I was on my way. Thanks to you, I'm much obliged For such a pleasant stay. But now its time for me to go, The autumn moon lights my way. For now I smell the rain, And with it pain, And its headed my way. Ah, sometimes I grow so tired, But I know Ive got one thing I got to do

My beloved Lake Fenwick will be wet for the foreseeable future as the rains moved in last night. The trail isn't bad, but the boardwalk is treacherous when wet. So I think I'm going to start track running, although I may do some neighborhood runs, I really dislike breathing exhaust from vehicles while running.

Yesterday's run saw my fastest sprint time on the boardwalk - 14.8 MPH which if I could keep it up would be a 4:02 minute mile - how anyone could run a mile at that pace is beyond my comprehension, after 1/10th I was at the end of my rope.

A Hike During The Break 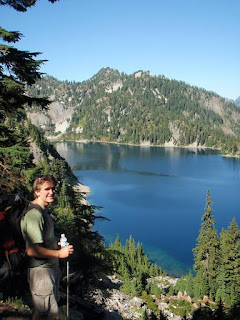 Last Friday my church's Music Director and I went hiking up in the cascades to a little place called Snow Lake. The locale was some of the most beautiful real estate in Washington. Approximately 4000 feet up in the Snoqualmie Pass area - just above Alpental Ski Area. The terrain was not too intense lots of forest with old growth, lots of boulder strewn hillsides. and most often a pretty good rise in altitude. The weather reports called for morning clouds until around 11:00 am so we thought that the hike would be nice and cool - we were surprised to find blue sky from sunrise on and the hike was warm - cool breezes were interspersed along the ever upward switchbacks and we made excellent progress. I was so thankful for the stairs at Fenwick, if it were not for those I might have had a bit of an issue with hike. Maybe the altitude was a factor, but wow, those switchbacks were a killer! 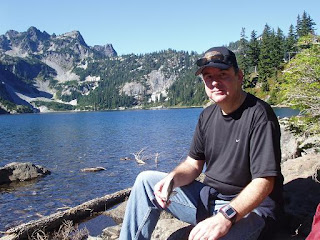 Lunch at the lake consisted of some energy bars and a package of beef jerky - a true hiking lunch if ever there was one!

Sitting at the lake, surrounded by the beauty really was the most relaxing time of my entire two week vacation. There were other people about but the lake seemed to emanate a peace force field that suppressed anything but a palpable sense of well-being and serenity. It was nice to see ground squirrels - not the large grey ones, but the little brown ones - showing up in goodly numbers along the trail.

A full day of hiking, we met at the church at 10:00am and returned at 4:30pm. I really thank Dean for the time and look forward to more exploration of the beauty this state holds.
Posted by Sam at 4:23 AM No comments:

A question of distance

First week of vacation is down - lets have a status check


Last Monday was a personal best workout - 13 miles at Lake Fenwick in 4 hours. I did four reps of the park at 3.3 miles per rep. I was a machine, but not without side effects, by the end of the hike my hands had swollen considerably, this was easily fixed by a good dosing of Ibuprofen when I arrived home. My muscles were sore, particularly groin area and hamstrings. I'm not sure why - the trail was dry so I had no balance issues. well, the soreness only lasted a day - and I took a down day afterwards so all is good.

Wednesday I cut my workout short, only 2.5 miles. I misjudged time and had to cut it short to be able to grab breakfast with friends from church. I had a great time, they are truly good men, and time with friends is something to treasure.

I spent much of the rest of the week playing video games and bought a new hard drive - 1.5 TB should be enough to keep my out of disk space issues for some time!

Saturday I hit the trail, it was early and it had rained the night before the trail was moist, but not slippery. The boardwalk was quite slick and I exercised caution traversing that hazard. On the way back I got to the boat launch and looked down, there was a baggy of pot - quite a goodly quantity of it too. Now having grown up in a permissive generation I had a quickly quenched tinge of temptation before calling 911
"No, this is not an emergency. I've found a large bag of marijuana and don't want to throw it in the trash"
I provide my name, location etc
"We are sending a patrol car to pick it up" the dispatcher's voice is emotionless
I move back to my truck. My inner teenager is shaking his head "wow this is the first time in your life you've found a large bag of pot and you are actually turning it in?"
The question kind of rang in my head and it was rather refreshing to snap back to him saying "Well ya, you dumb shit".

As I was waiting for the police to arrive, a blue "ricer" car with a big fin on the back pulls in to the boat ramp road and parks. three guys get out. They are not wearing jogging outfites, they have no fishing gear and they are looking down and walking towards the general area where I found the bag. Whoops! "Well boys, if you would have gotten here 10 minutes ago you would not have to look for such a long time." The police cruiser arrives about 15 minutes later and I pass him the bag. I don't say anything about the ricer car guys - they've had enough bad luck for one day.

Week two looks just as promising.
Posted by Sam at 7:40 AM No comments:

The peace and serenity of a thousand gnomes with bubble-wrap

The weather for today's workout was overcast, but in the woods the rain fell from leaf to leaf. The forest has assumed the demeanor of fall, and with a temperature of 52 f, it felt like a fall morning . One lone soul had ventured out in his boat on the lake at around 8:30am. Fenwick is an "electric motor only" lake and from the other side, he was silent. I noticed as I started my workout that one of the maples had lost a large branch - a good 1 1/2' diameter branch came down in yesterday's gusty rains.

I thought the grass in the field would be slick, but my shoes kept me well in line. as I hit the first board walk I found that it was a bit slippery - but very manageable at a jog. Silence. Early mornings seem to be a wonderful time for a run. No one is out on the trail yet and I can be lost in a zen-like jog. I notice as I run down the trail that the indigenous creatures of the forest are scurrying about more - like they are trying to get their morning activities done and I am encroaching on their time. "Not to worry, I'll be quickly past and you can continue your morning activities".

The stairs are wet, the handrails wet and cold. The spiders know that I am the first one here. Pulling the morning's web production off my face and arms I head down the stairs. When cold, the air may be thicker, but it seems not to help too much during the climb of the stairs, although I am recovering from the exertion quickly. I start to run at the bottom, but check my speed as the trail is wet and I don't want to end up in a heap. Not to fear, the traction seems to be good, just wet earth, not slippery muck.

The boardwalk at the other end of the run is a completely different story, what is my fastest area, normally managing 8 mph. This is now a deliberate act of concentration and foot placement. No jogging will happen here, and so my speed is limited to 2 mph or under. The park entrance at Reith Road opens up and I notice the clouds starting to give way to blue sky - in the woods the rain still falls from tree to tree, but the day promises to become more summer like.
Posted by Sam at 7:48 PM No comments: